The most common 'lumps and bumps' are cysts and fatty lumps (lipomas), but there are many other causes of lumps and bumps. Most lumps can be diagnosed in the clinic; sometimes investigation is required, either with an ultrasound scan or MR scan.

A lipoma is a benign (non-cancerous) fatty lump, found usually just below the skin. Lipomas are soft or rubbery to feel, and usually not tender. Lipomas may occur in any part of the body and size is very variable, from a centimetre to 10cm or more. It is not uncommon to have multiple lipomas, some people have a tendancy to develop this type of lump. Lipomas are slow growing and do not usually cause any symptoms, such as pain, however, this type of lump may be unsightly or irritating. An experienced surgeon will generally be able to make the diagnosis of lipoma by examining the lump. In some cases a scan (either ultrasound or MR) may be necessary.

Most lipomas are excised using local anaesthetic. It is often possible (with good surgical technique) to use a small incision for the surgery. The wound will be stitched; the technique used will depend on the site and size of the lump being removed. 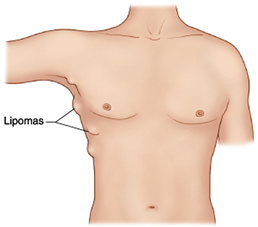 Sebacceous cyst is the common type of cyst, most commonly found on the face or body. Sebacceous cyst is caused by the blockage of one of the small sebaceous glands in the skin. Sebacceous glands produce the oily material that keeps skin moist; if the pore of the gland is blocked, the sebaceous material builds up into a cyst beneath the skin. This type of cyst is usually 5mm- 3cm in diameter, raised and stretches the overlying skin. The cyst may become infected; when this occurs, the cyst becomes painful, red and quite warm to touch. An infected cyst may discharge pale yellow, smelly material.

Sebacceous cysts on the face may be removed for cosmetic reasons, and removing the cyst will prevent the cyst becoming infected.

An infected cyst is best treated with a course of antibiotics initially, then excised when the infection has settled. 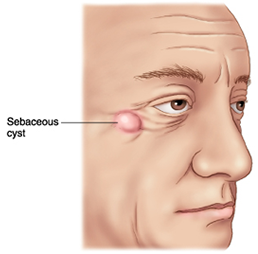 Dermatofibroma is a fibrous lump in the skin, darker in colour than the surrounding area and most frequently found on the legs. These are benign lesions (non-cancerous). Dermatofibroma is often itchy and feels quite firm.

Dermatofibroma is treated by surgical excision using local anaesthetic. It is usual practice to have the lesion checked by the pathologist to confirm the diagnosis.